PHILADELPHIA — A dilapidated building off East Passyunk Avenue in South Philadelphia is set to undergo nearly $2 million in renovations to be transformed into a new gym by two local entrepreneurs who are taking a stab at establishing their own fitness franchise. 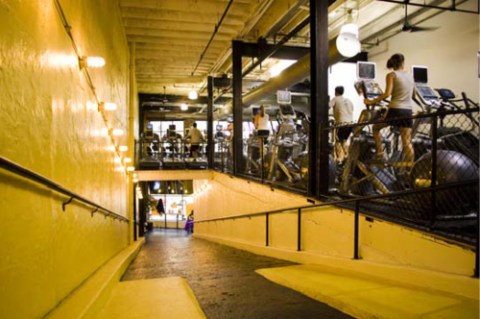 Scott Caplan and Dan Neducsin Jr. opened their first Sweat Fitness in 1997 at 23rd and Walnut streets in Center City. They have since opened four gyms in Philadelphia and have two — including the East Passyunk location — under construction. Their goal is to have eight Sweat Fitness facilities opened by late 2008.

“We want to be the most convenient gym for folks in Philadelphia,” said Caplan, 32, who started after high school working as a personal trainer at a gym in Manayunk. Caplan and Neducsin grew up together.

Its focus is Philadelphia and it has no immediate plans to venture into the suburbs. While gyms have typically relied on memberships for revenue, Sweat doesn’t believe that’s where its future lies. It has deliberately moved away from that model and has become less membership-driven and more service-oriented.

While Sweat charges $65 a month for a 12-month agreement or $75 month to month. Its “profit centers” are what it offers beyond a place to work out, features such as personal training, juice bars, tanning, hair salons that also do hair removal and the like, Caplan said.

They also want to be different. “Space is important to us. We’re not cookie cutter,” Caplan said. “Each club has its own flavor.”

Sweat Fitness tries to evoke an edgy, urban feel. Its logo, which is set to undergo a change, is a tough, muscular guy with a serious expression on his face and arms folded. Though yellow and black are the dominant colors in the gyms, each facility is designed differently and tries to draw from the neighborhood and building’s architecture for its interior design cues. The East Passyunk building is a classic example of the type of location Sweat is drawn to and how a new site will be transformed into a prototype Sweat gym.

The 20,000-square-foot building at 1509-13 E. Passyunk has sat as an eyesore in the neighborhood for years. The Inverso family owned the building and it was used for the family business. A fire damaged the building after it was vacant, said Ken Mallin of Mallin Panchelli Nadel Realty, who was hired by the family to market the building for sale.

The family recently decided to put the building on the market. The ideal buyer would be someone who would convert it to a commercial use rather than residential, creating an active spot, Mallin said. Sweat Fitness thought the building worked well for its gym and paid $645,000 for it.

“I love South Philly,” Caplan said. “It’s densely populated, there’s not much in terms of fitness facilities and this is a cool location. We like where it is.”

Caplan will gut the six-story building and make it a three-story building, giving it an airy high ceiling and skylights to bring in natural lighting. The building’s exposed brick and wood will be incorporated into the overall design.

“It’s going to be very cool, very urban,” Caplan said. “Like our other places, we try to keep the building as cool as possible. We’re selling an experience and we want to make it an exciting and happy environment.”